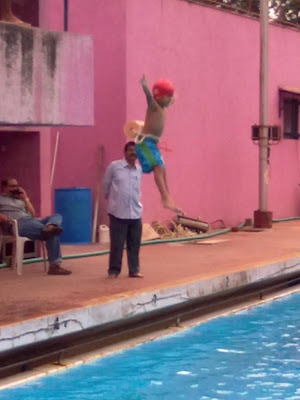 Kabir's swimming classes started two weeks ago. There are a total of 20 classes over 4 weeks, one hour every weekday. The kids have already come such a long way in these past two weeks, that I decided I must make a note of the little steps they took along the way to get this far. Especially so because the beginning was really challenging for Kabir and for me. Every day in the first week of the swim camp I wondered if he was really ready for it and whether I was right in pushing him so hard.

This evening when the boys were engaged in post-dinner play, I opened my laptop to go through some emails. Anu tried to get my attention by calling out to me and when I didn't look up he came and sat next to me on the floor and said "mama, Anu sad ho gaya" (Anu has become sad). Its the first time he has said anything like this! I was amazed by how well he could understand his feelings and express them to me. It was only after I had shut my computer and snuggled with him for some time that he started to smile again. :)
Posted by Pooja at 9:46 AM No comments:

Saurabh is in San Francisco and he has a special visitor who has come all the way from the other coast to meet him. She seems to be really happy seeing Saurabh mama. 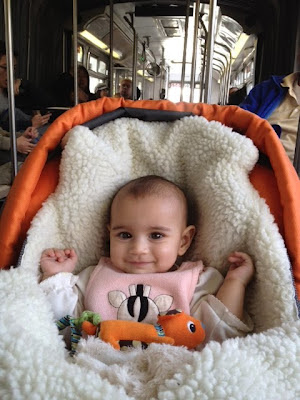 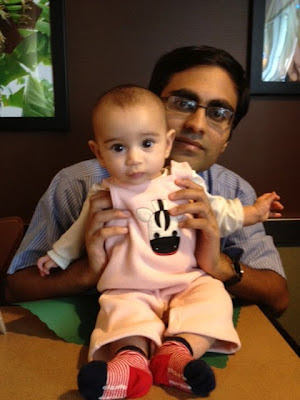 It is a 4 day weekend for us this week. In the US, we used to plan our long weekends way in advance but here since long weekends are in abundance, they have lost their charm. In fact it wasn't until last week that I even realised that we had a long weekend coming this week. Yet, the weekend has turned out to be special so far.

On Thursday we all hired a car and spent the day in Colaba/TIFR. Took the kids to Gateway of India, shopped at Colaba Causeway, visited some family friends at TIFR and stopped at the Taraporewala aquarium on our way back. It was a fun day and the kids had a wonderful time.
Anurag with Anita at the Gateway 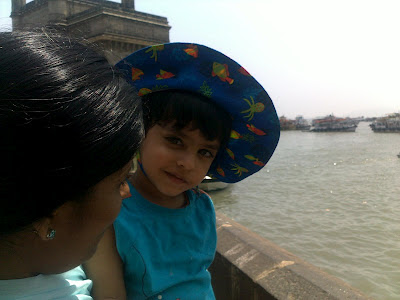 The aquarium was a bit of a disappointment for me but was good enough for the kids. Kabu's favourite exhibit was the huge whale skeleton on display and he couldn't stop asking questions on how and why the whale had died and how the skeleton came out of the whale. Anu on the other hand was mesmerised by the "totos" (turtles).

On Friday, we got together with Ankur and family. It was great catching up after 12 years!

This morning (Saturday) Kabir and I went swimming. I've been trying to teach him swimming for a while now but I've been going really slow to make sure that he enjoys himself. Today he made a huge leap and left hold of me for the first time and floated by himself only holding on to a floating board (and not wearing any floats). Ofcourse I had to cheat and let go of the board quietly but he was thrilled when he discovered that he could float and move without my help and refused to take my help thereafter. I have signed him up for a swimming camp starting Monday, so I hope this will make him more confident.

Saurabh left for a short US trip tonight, so the next 10 days don't look as exciting. Lets just hope that the kids manage to stay out of trouble and sickness and don't have any middle-of-the-night meltdowns till we have all hands on deck.
Posted by Pooja at 10:44 AM No comments: 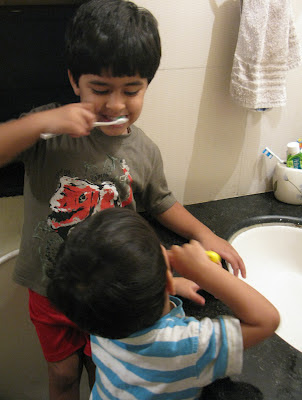 Kabir is a super elder brother and such a big helper! He encourages Anu to brush his teeth (which I clearly can't), teaches him counting and colours (I have a video on this that I must upload one of these days), "reads" books to him, feeds Anu dinner when he refuses to eat from anyone else but him and most recently even helped Anurag to go and pee in the toilet!
Posted by Pooja at 11:35 AM 1 comment:

In case this blog gives an impression that I'm in control of this parenthood stuff, here are some lesser-known facts that I'm not so proud of

-I can't get Anurag to brush his teeth regularly (even say once a week).

- I have never managed to give any supplements to the boys - calcium, iron, anything. They resist it and I have stopped fighting the battle.

-I have been too laid-back with the vaccine schedule for the boys. Anurag still hasn't got his 18 months shots yet and Kabir is overdue for his Typhoid vaccine. One of my excuses is that there hasn't been a period longer than a week when Anurag hasn't been sick or recovering from sickness in the last few months. Moreover, unlike how things worked in the US, I don't have pre-scheduled appointments with the pediatrician forcing me to stick to the schedule.

- Kabu was day time potty trained by 18 months and I thought I was brilliant for making that happen. At 2, Anurag still refuses to sit on a potty and Kabu got out of night-time diapering only recently.

- I love to bake cakes, muffins and cookies for the boys. And then I am forced to eat them myself so they don't over indulge. And oh, I usually eat most of the chocolates meant for my kids.
Posted by Pooja at 10:10 PM 2 comments: