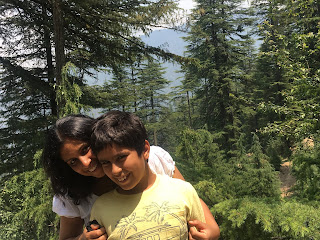 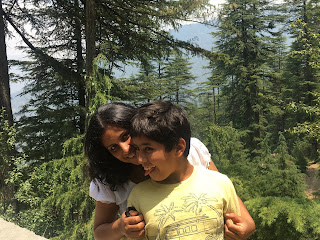 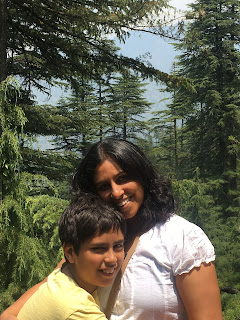 Trekking musings and the Lapah trek

Over the past few years, we have had varied experiences trekking in Himachal. On the one hand we have experienced spectacular natural beauty, and on the other we have had a glimpse into the lives of people living in the remotest of places and under harsh conditions (for example, the solitary lives of the shepherds that we have spoken to, our the Nepali thapa who we met in Plachak last year). During our treks, Saurabh and I often talk about what we seek most on our trekking trips. There is always the thrill of going higher and walking further every time with the kids: the sheer physical thrill and challenge of it is perhaps good for gratifying the ego among other things. We hope that it also makes the boys mentally stronger and it certainly allows us to experience more remote and beautiful places (like the Bhrigu trek, or the trek to Ilaqa glacier and Ranthar last year). Personally, I find myself to be more self-centered during such treks - and my thoughts tend to be more about the marvel of nature and our relation with nature. On the other hand, the other types of treks we have taken are those which are more unstructured, where we start from a forest department rest house and trek further into the hills to more remote villages (Lohardi to Swar in our first year, Bir/Billing-Rajgundha-Plachak last year and the Lapah trek this year). While these are at lower elevation and not so physically challenging, they are through beautiful unspoiled forests where we also experience the lives of people who walk through these very trails as a matter of routine and think of nature as not just a thing of beauty but something that is life-giving. I cannot forget our conversation with the shepherd and the Thapa we met in Plachak last year where we learnt that the trekking routes through Thamsar pass do not begin until the shepherds have crossed through this pass back to Bada Bhangal since it is their sheep and goats who help open the pass and mark the trail. It is only then that the big trekking groups come in reveling in the spectacular natural beauty and the thrill of crossing a 4000m+ pass. But to not think of the shepherd while doing so can only be a false ego-trip.

I realized that I never posted a detailed account of last year's treks on the blog. Since that is unlikely to happen now, I should at least post a couple of pictures which I'm sure I had saved to be posted with the narrative.

Rest of them from last year are here 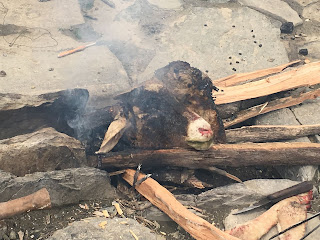 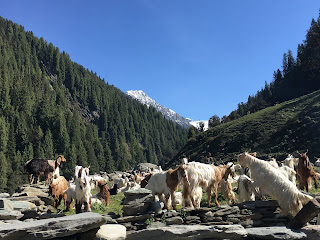 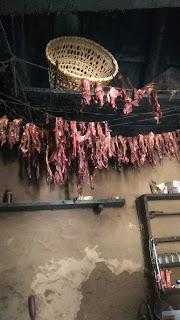 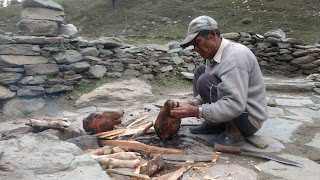 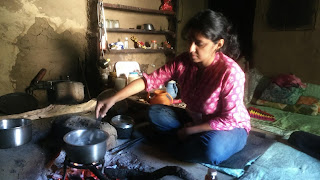 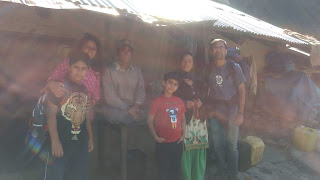 The trail was a beautiful one meandering through beautiful old growth forest of pine, chestnut, walnut, maple and rhododendron trees. It took us about 5 hours to get to Lapah with multiple breaks along the way (the locals take 1.5 hrs for this journey!).  We had requested a villager from Shangharh - Devinder- to accompany us to Lapah, which was fortunate, because when we reached Lapah we realized that Chunni Lal ji (the chowkidar) had been posted to Bah - a village downhill. Devinder helped in figuring out who had the key to the forest hut. When we finally tracked Shirpad ji (who lives in the upper Lapah village), he handed us the key and warned us that we were on our own and there was no one available to cook. The hut was in significant disrepair (with no water or electricity) but at least it had two beds with warm blankets. Shripadji tried to find someone who may agree to feed us that day but since its the Rabi harvest time in this area most people were away working in their fields. He suggested that we could try finding Babli didi later in the evening who is also a forest department worker.

In the evening we headed to the main village looking for Babli didi's home. When we found her we asked her if we could get tea in her house and if she or anyone else in the village would feed us dinner. (This is such a normal thing to do while travelling through Maharashtrian villages that I was quite unprepared for their reaction). She and her sister were quite intrigued at first and asked us many questions. They were surprised that we had landed without any food supplies. They were also very sympathetic towards K and A and how tired they look. Finally they told us quite apologetically that unlike the plains, people in the hills are very strict about the caste system and that their devta would not allow them to even offer us a chair to sit unless we were Rajput Thakurs like them (or better). Saurabh and I struggled trying to answer this tricky question - what was our caste? I also felt ashamed at wanting to sound like we were up there with their caste so we could get dinner. While Babli didi was quite willing to relent and let us into her house, her sister was more suspicious and suggested that they would instead bring food over to our hut. For tea, they asked us to be seated on the rocks outside their home and brought us hot tea and siddu - a typical Kullu preparation that we tasted for the first time (a baked bread with walnut filling). Once the modalities of how we could be served the food became clear, Babli didi and her family were quite hospitable towards us. However, K and A felt quite upset and kept asking why they refused to let us in.

We roamed around in the village after tea. Babli didi's sister showed us their temple from outside and the homes of the few "caste wale log" in the village after which we headed back to our hut. Evening brought thunderstorm and rain. The four of us huddled together in the blankets and played Atlas until Babli didi finally appeared with a tiffin box at 8:30pm. We ate hungrily since this was our first meal since breakfast and the food was delicious: roti, a local green leafy vegetable, daal-chaawal and kheer! She sat with us while we ate and chatted with us for a long time. We learnt that she is only 38 years old and the 6 year old boy with her (Aditya) was not her son but her grandson! She told us about all her family members and her livestock. She had recently lost a cow who had died by slipping in the hills. So she now had a new cow Gauri and her one month old calf. She has 15 sheep. She had worked in the fields all day - harvesting fodder and sowing maize. She also had to run down to Bah village every day to water the saplings in the forest department nursery. She said it took her half hour to get to Bah every day (which took us 1.5 hours the following day). Her son had gone into the forest and had been camping there for the past few days foraging for medicinal plants which grow in this season and are sold for a good value. It turned out that her parents' home was in Shangharh and Prabhat ji (the cook at the Shangharh rest house) was her nephew. The conversation was a peek into their close knit community and a world so different from ours, it was quite humbling.

Babli didi was back early in the morning with tea and fresh milk (Gauri's milk). We took some pictures with her and on Anurag's insistence she took us to her cowshed so Anu could play with Gauri's calf for some time. We bade her goodbye and walked downhill to Bah, crossing the untamed, undammed Sainj river before reaching Niharni where a new hydro project kills Sainj's spirits and tames her down to a trickle. We had breakfast at a dhabha and hitched a ride in a pick-up truck back to Shangharh. A trip to remember, for sure. 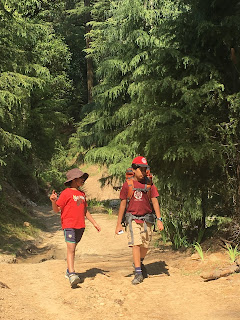 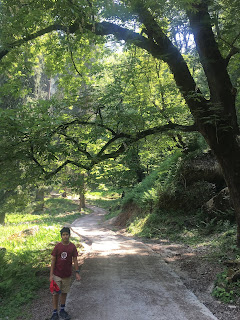 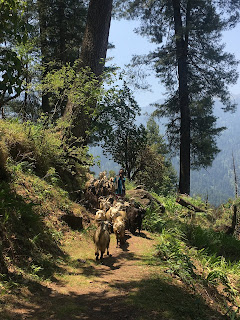 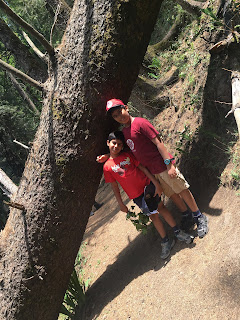 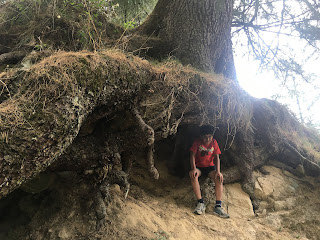 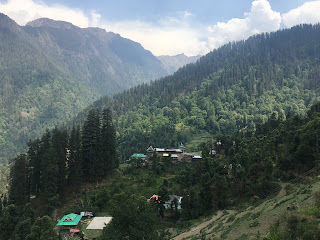 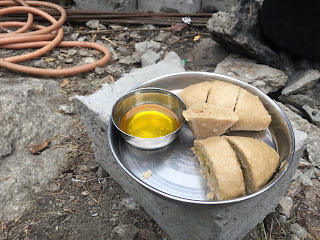 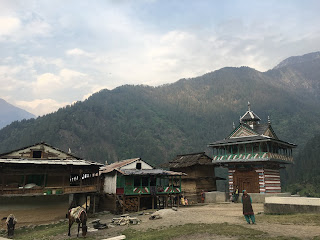 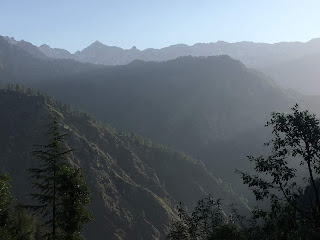 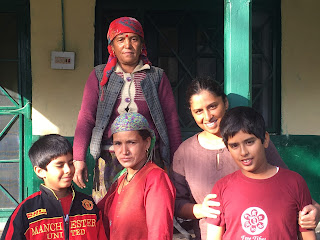 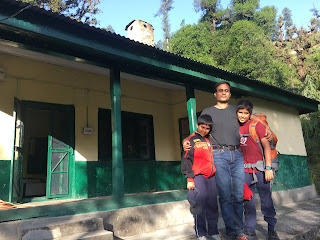 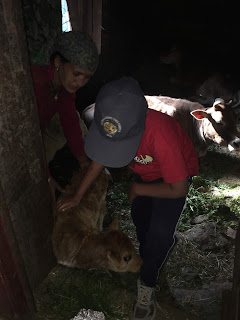 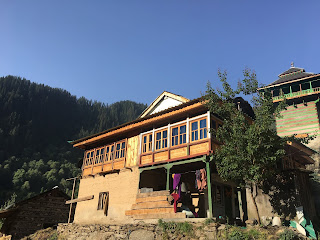 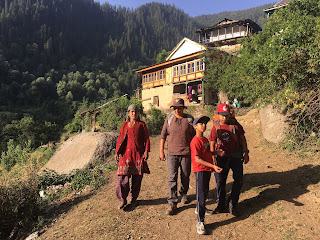 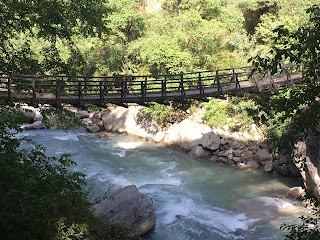 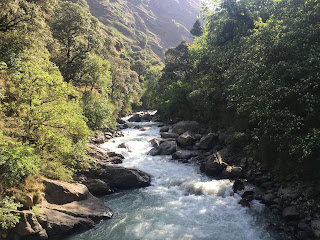 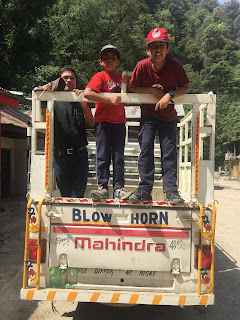