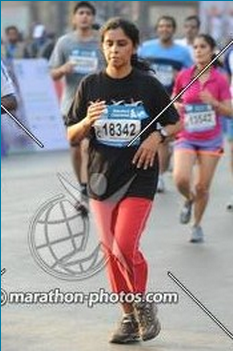 I am happy to have run the Mumbai half-marathon this past weekend! I had been practicing half-heartedly for some time now, and almost didn't run it. But thanks to the encouragement from some friends (especially Prakriti, who was my running partner on race day), I did it and timed 2:27. Saurabh was travelling for work and couldn't come to the race. I talked to the boys the night before the race and told them that I was worried that I won't be able to run. Kabir's response was: "Mumma you dont have to run if you are worried. Just stay at home with us." And Anurag's response " Mumma you run well. I will also run with you." :-)

Views of Kanchenjunga, visit to a Buddhist monastery and the confluence of Rangit and Teesta rivers 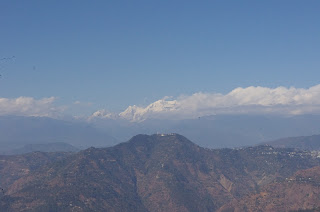 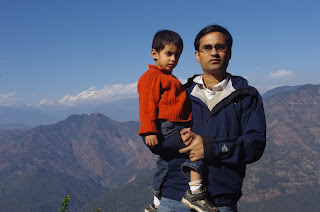 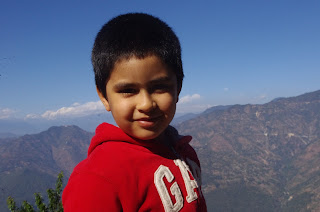 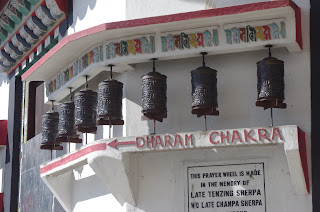 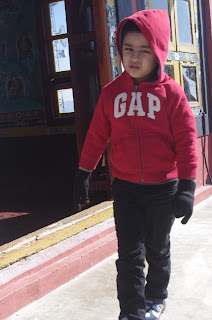 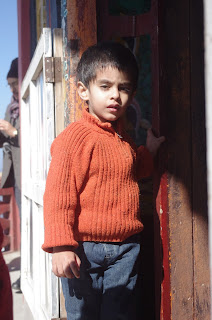 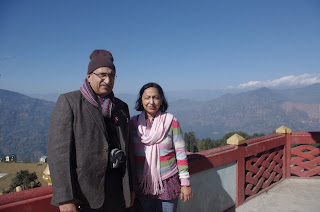 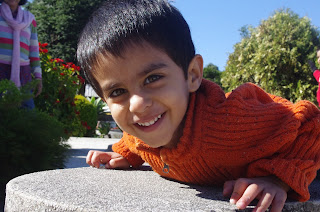 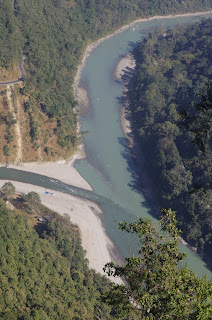 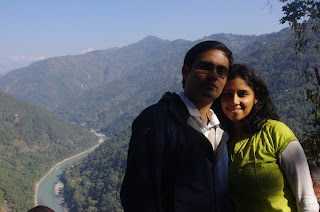 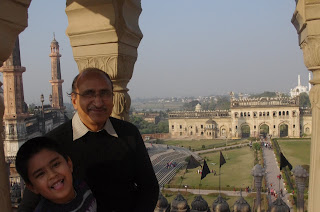 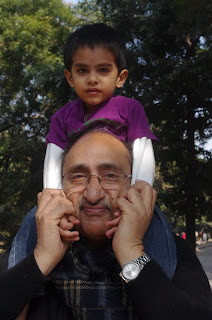 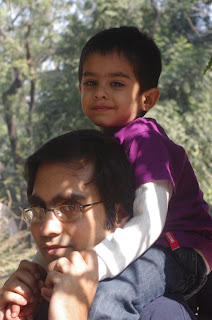 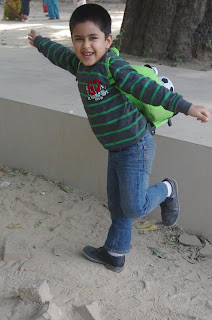 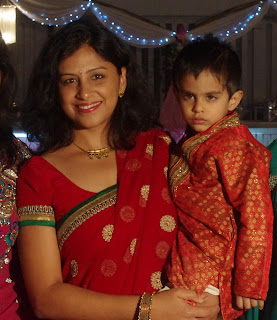 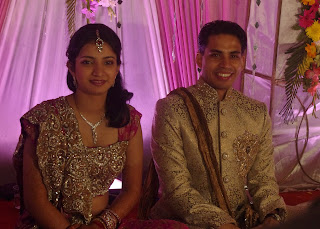 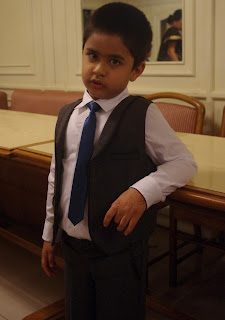 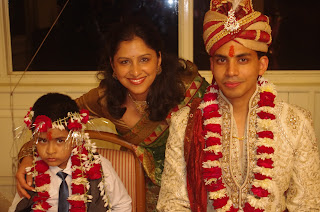 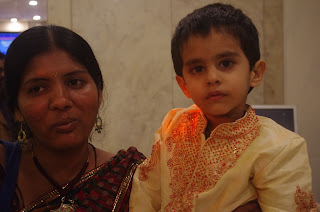 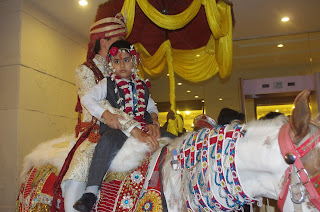 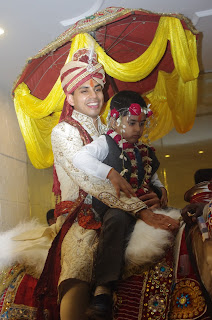 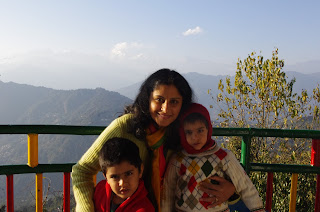 Hanuman Tok - Gangtok
December turned out to be a whirlwind of a month with two family trips - a weeklong trip to Lucknow in 2nd week of December to attend Mayoor's wedding and our 8 day LTC vacation to Darjeeling/Sikkim in the last week of December. I'm not even counting Saurabh's trip to Thailand in the first visit of Dec.

Lucknow trip was fun - the best part was that Anita also traveled with us. Thanks to her, we could stay up and be a part of the celebrations even after the kids had gone to bed. In spite of the regular wedding related work we managed to get out to do some sightseeing - visited the Bada Imambada and the Lucknow zoo. The bhul-bhulaiya at the Bada Imambada was a huge hit with Kabir who kept assuring us that he would be able to get us out of the maze. Saurabh almost got the way out, but eventually we had to be rescued by the guide to get out of the bhul bhulaiya. The Lucknow zoo was wonderful (I'm sure any zoo would be compared to the one in Mumbai!). The kids got to see giraffes, zebras, tiger, a white tiger and the other usual animals. Had a great time at the wedding, getting together with my side of the family. The kids met Amara (Mohit/Dina's daughter) for the first time. Anurag and Amara bonded instantly while Kabir and Abir (Cheena/ Siddharths son) were inseparable. Anurag was completely anamoured by the "dulahan" (his new mami Shruti). He kept asking to sit next to her and in fact sat in Dina's lap for the Sagai ceremony so he could carefully see the god-bharai ceremony. In fact, at one time he said that he liked the dulhan so much that he wanted to be married to one too!
The highlight ofcourse was the wedding night when Kabir was decorated with flowers (sehera-bandhi) and  got to accompany his mama (the groom) on the horse during the Ghudchadi ceremony. He received a good deal of Tika money which, after some persuasion, he safely invested with his nana. We had a nail-biting end to this trip when our return ticket got misplaced, but after some jugad, we were able to make it home alright! This was also the first time when Kabir travelled alone with his nana-nani (by plane) and stayed with them for 2 days while the rest of us joined them by train.

The second trip was our LTC trip to North East - a holiday package that we booked through Air India. Our itinerary was Kalimpong (1 night) -> Darjeeling (2 nights)  -> Pelling (Sikkim) (2 nights) -> Gangtok (2 nights). The trip started off badly as Darjeeling was way too cold and our hotel there (the Swiss Hotel) turned out to be quite bad. We visited the Himalayan zoo there and took the toy train ride. The evening walk on Mall road on Xmas day was enjoyable. But Anurag soon fell sick and we had to find a way to get him nebulized. We also bought some thermals and warm clothes for kids after which we were much more comfortable. Thereafter, things turned around and the rest of the trip was fun. Sikkim was simply beautiful - panoramic views of the Kanchenjunga, thick forests, beautiful Rangit and Teesta rivers, colourful  monasteries and warm and hospitable people. Pelling turned out to be our favourite destination. We went to the local fair where Kabir enjoyed the Ferris-wheel ride. Visit to the Kanchenjunga falls and the Rabdentse palace ruins were the highlights. Gangtok was another great stay. Though touristy, it is a clean and well organized city. We took the cable car ride and strolled on the M G Road. A visit to the Hanuman Tok and Ganesh Tok was also enjoyed by the kids (especially Anurag - the biggest devotee in our family!). I was worried about the long (3-5 hours) drives every other day on the narrow hilly roads but fortunately, the kids actually loved the car rides. I'm sure we're now going to plan more road trips in the future. Also, this was the first time we visited a place with both kids where we didn't have a home so I was worried about what the kids (mainly Anurag - the picky eater) would eat. This turned out to be a non-issue too as all hotels had restaurants which went out of their way to prepare home-like food for the kids. In fact, at my request they even prepared the local kadha (ginger/honey herb solution) to help Anu keep his cough off. Overall, a great trip, but we have only scratched the surface. So there will certainly need to be a next time- to Sikkim alone- and with some trekking included.

Pics of both trips to come soon.