The berry-picking season is here again! Yesterday we drove up to Sauvie Island to pick some strawberries, blueberries and raspberries. It turned out to be an ideal outing for Kabir since he loves being out in the open and picking fruits off the plant branches seemed to satisfy his appetite for destruction. Being able to treat on fresh juicy berries was a bonus!

On a side note, I can't help but recall last year's berry picking outing when Kabu was just three months old. See how tiny he was? This time he made up for the berries he couldn't taste last year :-) 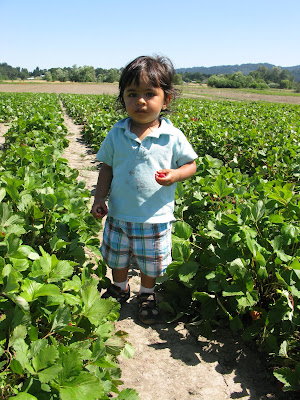 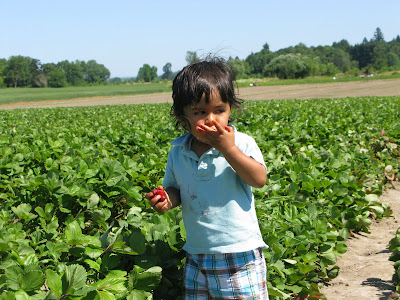 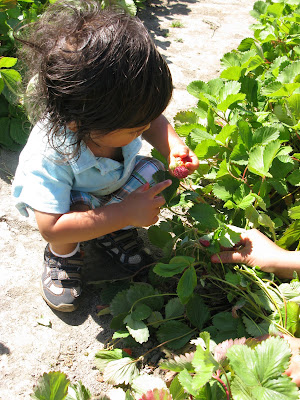 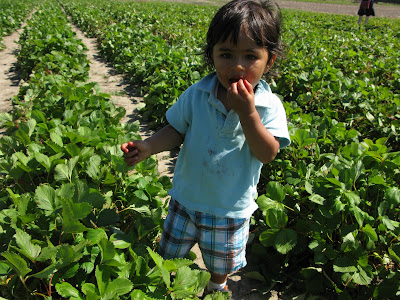 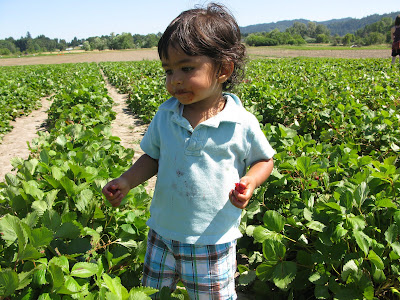 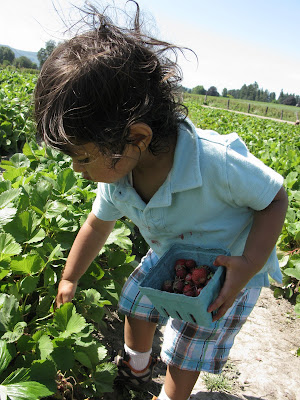 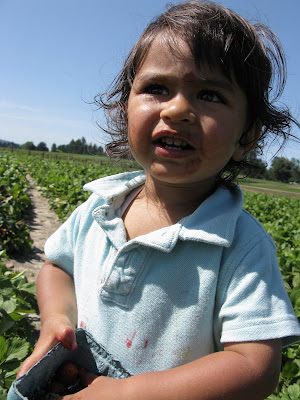 A week in Japan

We had the opportunity to travel to Japan last week. Saurabh had a conference there and Kabir and I joined him to make it a vacation. Although it was short and somewhat hectic, the trip was good and we had a nice time.
The biggest challenge of the trip was finding vegetarian food for us. Thankfully, we had already forseen the problem and had practically carried our kitchen with us. I took a little electric hot plate to cook food on, a pressure cooker, a hand blender and some raw material to make kabu's khichdi, oatmeal etc. We found a local supermarket from where I could get fruits and vegetables to make Kabu's food. I didn't have so much patience when it came to our own meals, so we usually just heated the frozen parathas that we had carried with us. On a couple of occasions we found a vegetarian or Indian restaurant and treated ourselves to a full meal!
So all in all, we were able to cope with the food issue well, though not without any glitches. On this trip, Kabu became overly fond of popcorn (or bubkun, as he calls it) and asked for it constantly when we were out sightseeing. Since I hadn't anticipated his sudden love for bubkun, we ran out of all that we had pretty quickly. So I had no choice but to look for popcorn in a Japanese store. We found it, but we couldn't read the label on the pack. Since Kabir is allergic to dairy (and egg and nuts), I was afraid that the popcorn would contain butter. In any case, we tried it and decided that it didn't have any buttery taste and so Kabu was back to enjoying his bubkun. On our last day there, we met with some friends who could read Japanese. I asked them to read the label, just to reassure myself that there was no dairy in the popcorn. It turned out that we were right - there was no dairy in it afterall. But oh, there were prawns and octopus in the oil and the flavoring! Can you believe that?! Who would want octopus in their popcorn??! My friends joke that atleast we now know that Kabir is not allergic to octopus...oh well.
I've already posted all the pictures on Picasa and Facebook, so in this blog I'm only posting some of my favorite pics of Kabir from the trip. You are welcome to see more on Picasa.

Playing in the hotel lobby 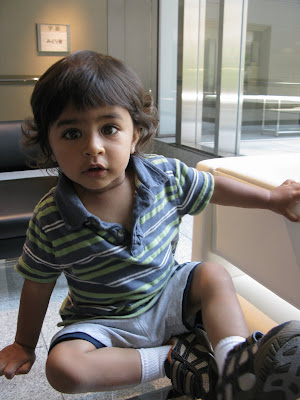 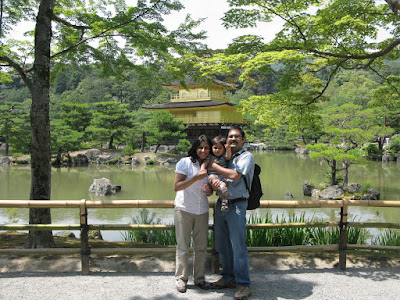 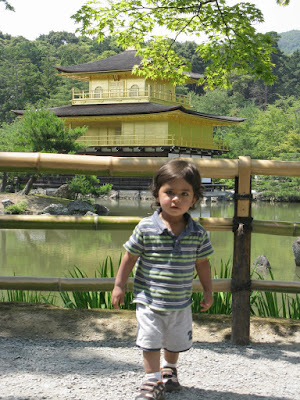 Getting dressed to go out 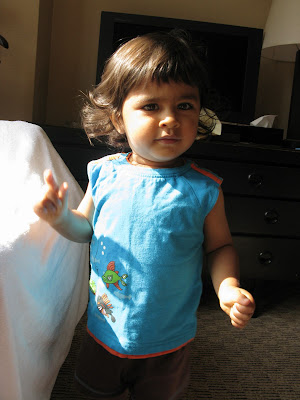 On the rooftop of Kyoto Station Building 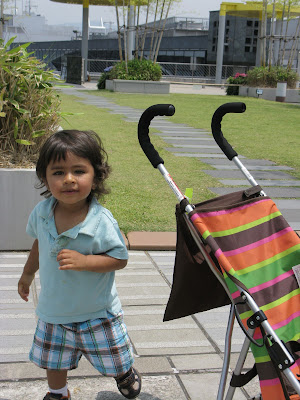 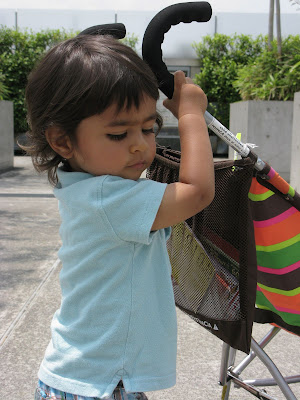 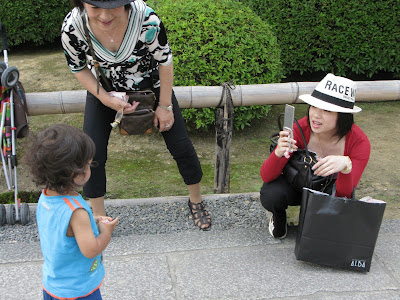 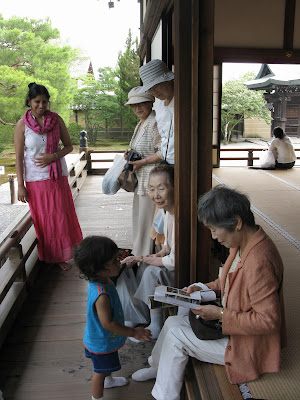 Outside a Buddhist temple 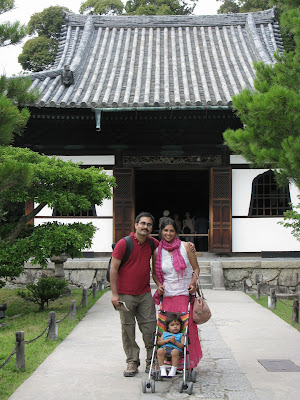 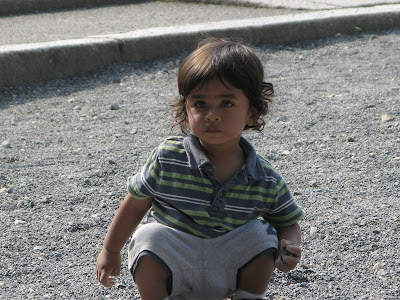 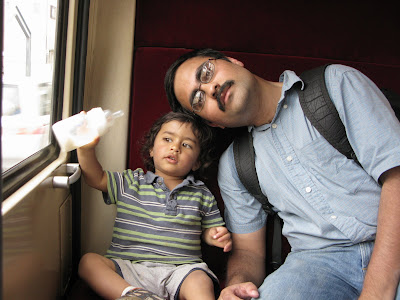 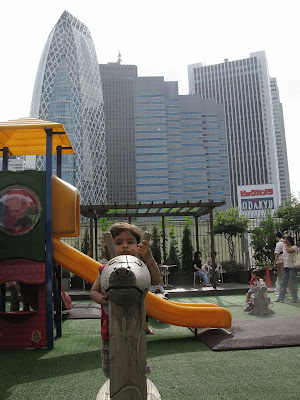 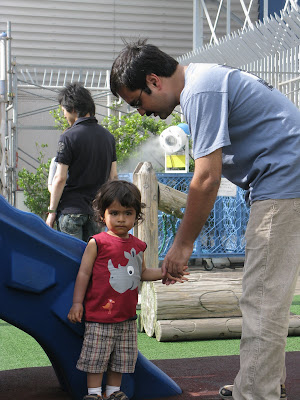 Over the last few months Kabir's vocabulary has become a source of entertainment for us. He doesn't say a lot of words yet and I believe its because he's being exposed to three different languages. We speak Hindi at home but its sprinkled with a lot of English nouns. And all of Kabir's books are in English. So while he understands Hindi better than English, most of his spoken words at this point are English. And finally, his nanny cannot speak English and only speaks to him in Hungarian and she claims that he can understand her well! I don't know if Kabir speaks any Hungarian, but since I don't understand most of the words he uses, I'd like to assume that they are valid words in Hungarian :-)

In any case, the other day I wanted to count the number of words he speaks. So I made a list. This only includes words he uses in a meaningful way, not counting words he merely repeats after us. Here they are in no particular order:

Of these words there are some that are so loved that he says them even in his sleep and/or first thing after waking up in the morning. These are: no-no, cooker, phone, dudu, bubkun and papa. Papa ofcourse is very proud that he's right up there with phone, cooker and bubkun. But I think its just because "papa" also means "byebye" in Hungarian. I know...sour grapes :-( I'm so upset he doesn't say mamma very much. And to add insult to injury, whenever I ask him to say "mamma", he says "papaaa" instead. So unfair!

I will keep adding to this list as I remember more words.

Here are a couple of videos with Kabu's reaction to Farida Khanum's ghazal/video on youtube. It is a little concerning that he's practicing bhangra like steps to the ghazal and thinks he found a ball in the video. Or perhaps he's living up to his name and performing a sufi dance?! But what's that about the ball??