We are all packed to leave the Mumbai heat behind! We leave for Mandi (Himachal) today for a 3 week long stay. Saurabh plans to teach a 1 credit course in IIT Mandi for the summer while it will be a vacation for the rest of us. Hopefully we'll get to travel a little during the weekends, but even if we don't, it will still be nice to have a new home in the hills for a short time. Also looking forward to catching up with our friends there.
Posted by Pooja at 5:15 PM No comments:

Anu is getting more comfortable putting his head in the water while swimming. Starting this week, I've been sending him into the pool without going in with him myself. I took him to the deep side with me once and he is still pretty uncomfortable with that.
Kabir learnt the butterfly stroke this week and has announced that its his new favourite stroke. Video to come later.

Update as of 28/4/15: Swimming camp ended today with the endurance test in which all swimmers have to swim as much as they can in an hour. Kabir swam 1.35 km! 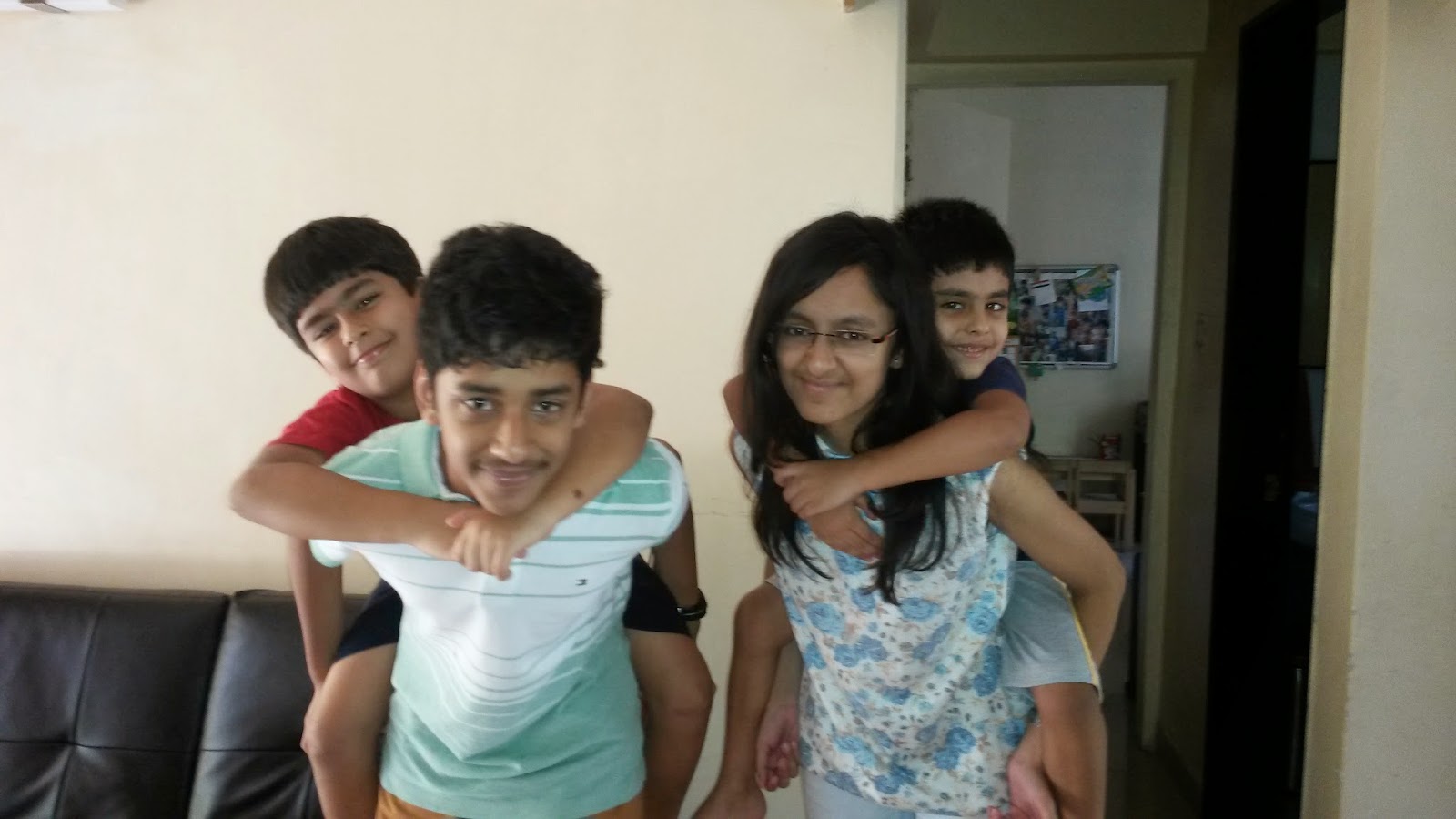 K and A with cousins Saipriya and Soham who visited this weekend from Hyderabad
Posted by Pooja at 3:50 AM No comments: 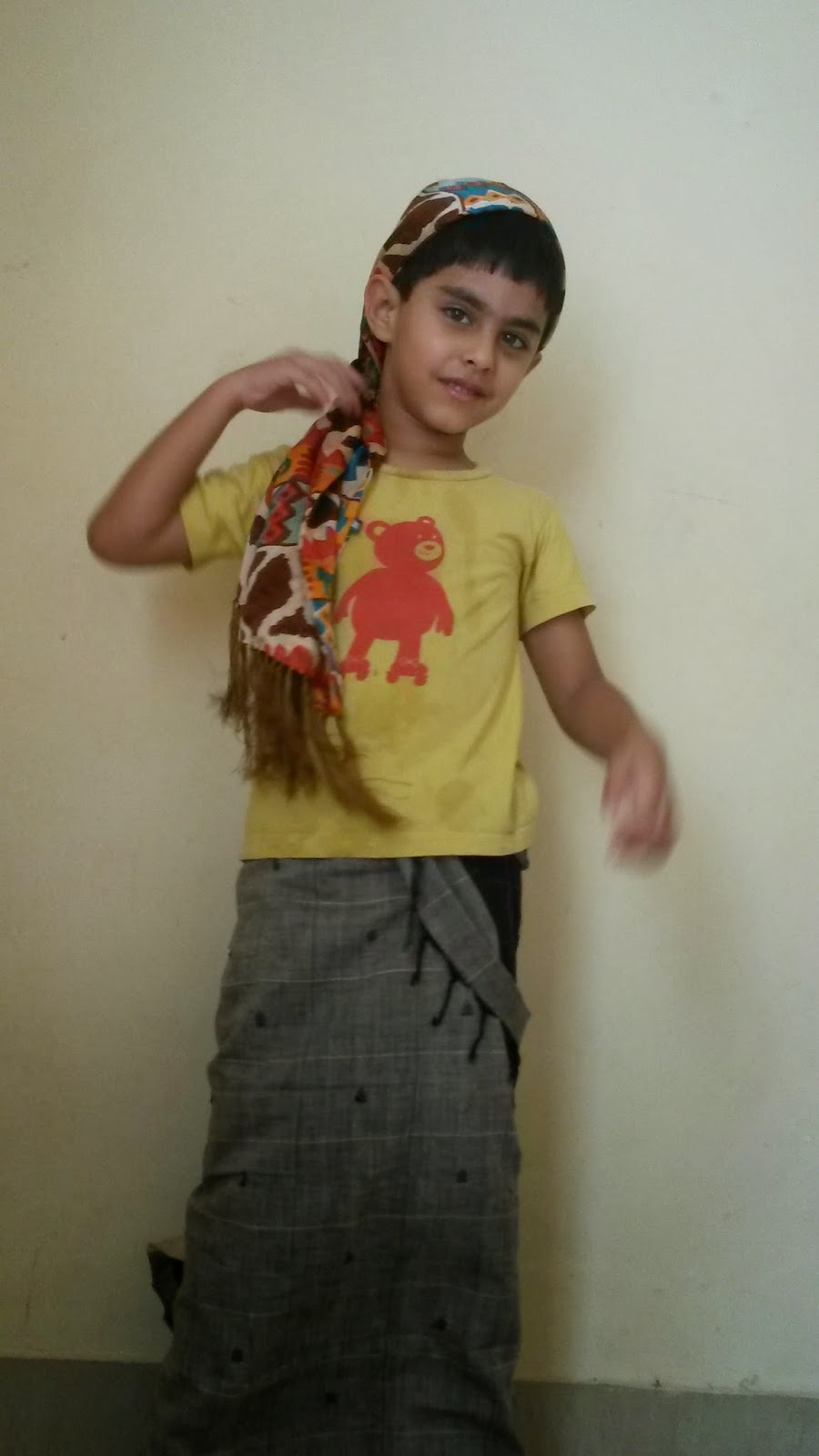 Anu during his pretend play this morning
Posted by Pooja at 10:58 PM No comments:

The peak swimming season is here. Kabir is in Reddy sir's intermediate camp 6:30 to 8:30 pm. The rest of us spend the time in the pool as well trying to beat the heat. Anurag is more confident in water- his feet touch the floor in the baby pool now. He likes to jump in, splash around and can dog-paddle. We're trying to get him to be comfortable starting to put his head in while swimming and learning how to breathe. Some videos from last evening.


Kabir is the one with no swim cap 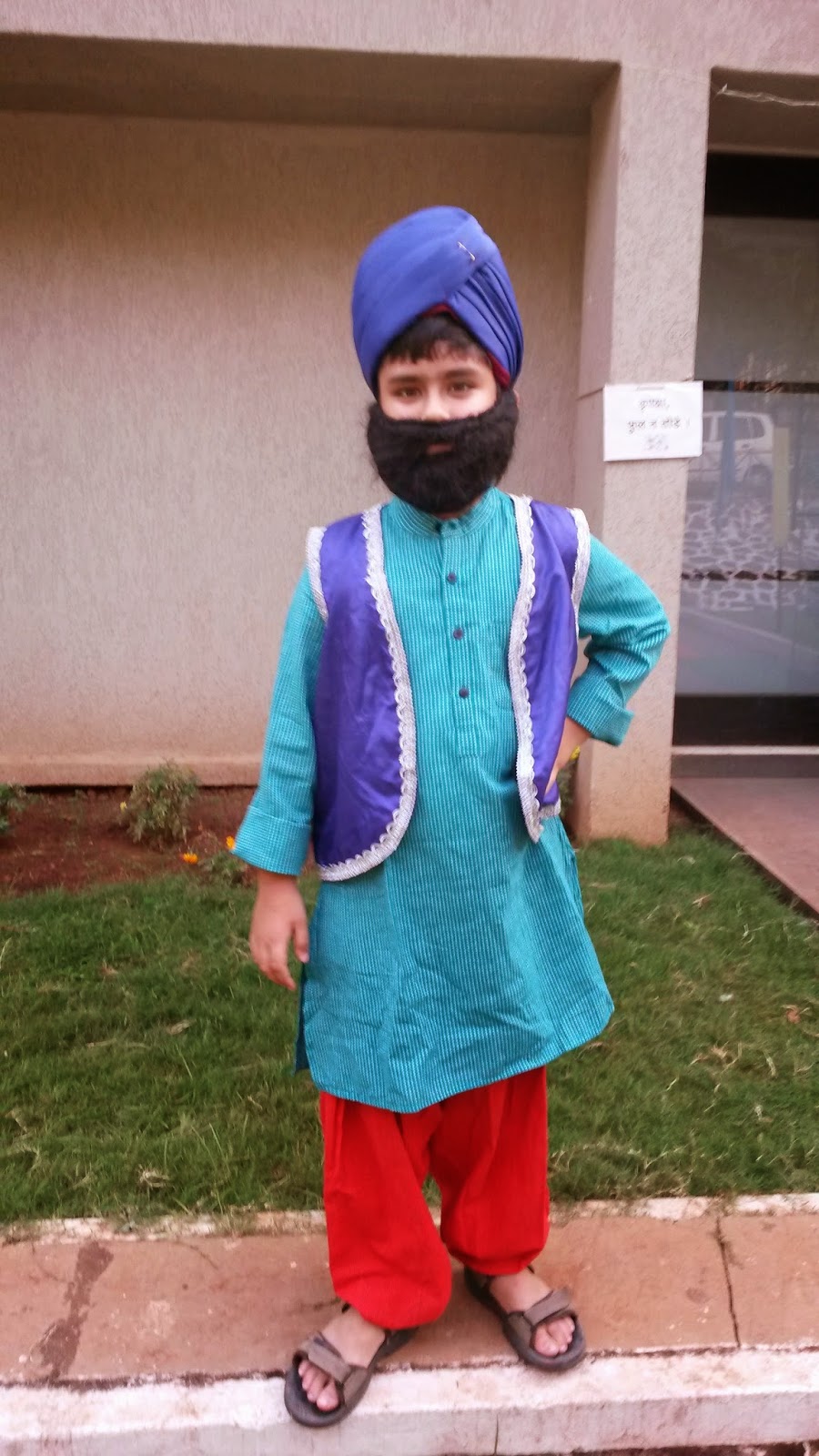 Kabir dressed for his school annual day
Posted by Pooja at 8:07 AM No comments:

The trainer wheels come off for Anu!

We were treated to a special surprise on Sunday. When the boys returned home in the evening after their evening playtime, they announced that Anu has learnt to ride the bicycle with the trainer wheels off! He tried a friend's bicycle that doesn't have the trainer wheels. Apparently Kabir supported the cycle for some time and then let it go....Anurag just kept going and even managed to turn the cycle back. He's been on a roll since then. Interestingly he's been riding his own cycle with only one of the training wheels on for some time now (because of parents who are too lazy to get the other wheel repaired).
We've promised him a new cycle soon - his overdue 5th birthday present!
Posted by Pooja at 11:13 AM No comments:

Kabir started Class III today and Anurag started his new school - Peace Montessori. School will go on for a month before summer vacation starts. Its a bigger change for Anurag since its a change of school. We plan to have him go to the new school for a year before he joins Kabir in KV in first standard. He would have been one of the youngest kids in his class in KV had he joined this year (being March born), so we decided to have him wait out for a year.
Today was his first day and he settled in quickly. There was a car washing activity in school which certainly helped him like the new school. The tricky part is going to be the pick/drop logistical routine for us, which we need to deal with for this year. 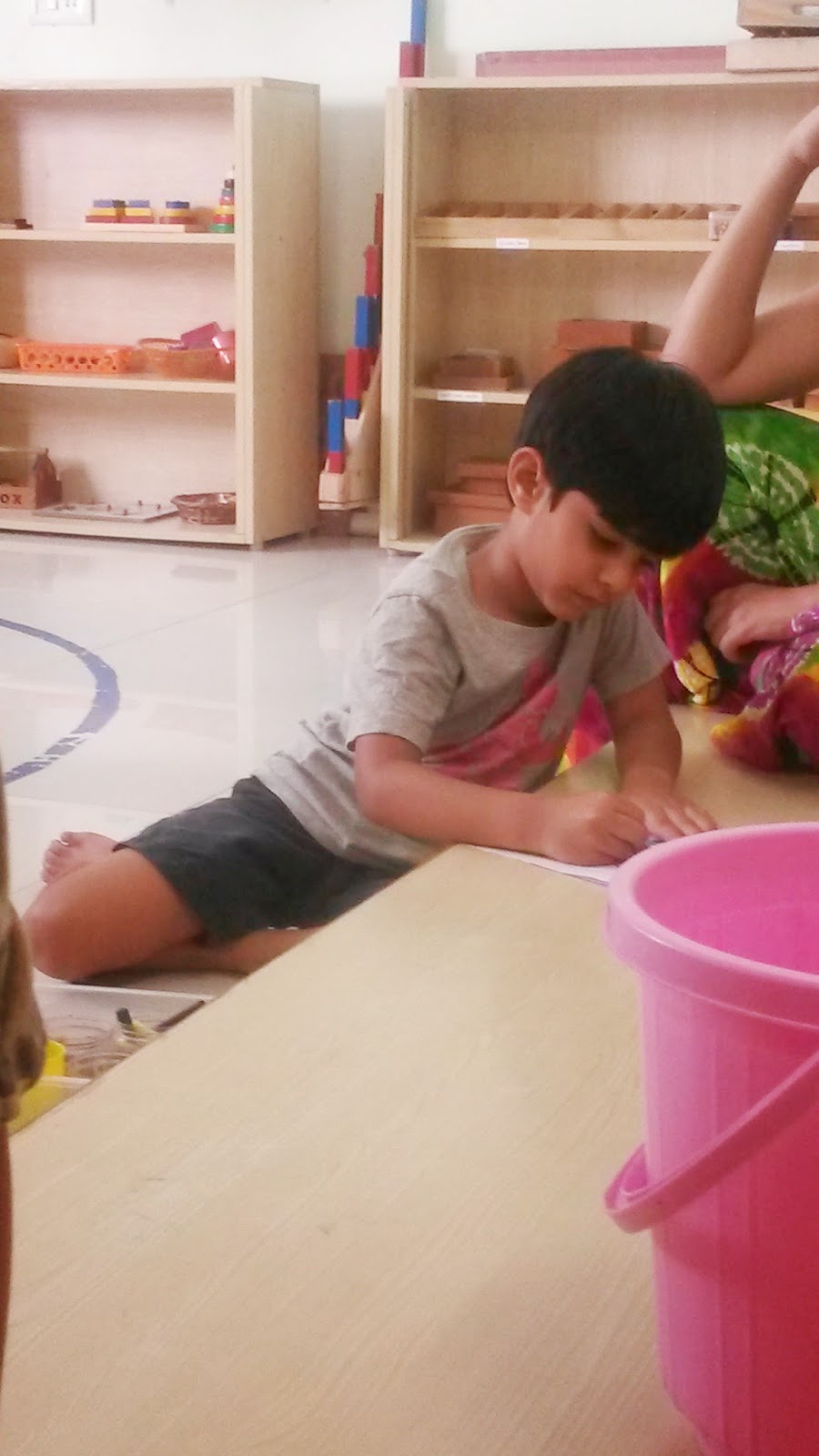 Anurag's class performed a charming Konkani dance for their Annual day (based on the song ya ya mayaya). Video to be uploaded later. Here is poses before the performance with his best buddy D who was in a different dance performance. 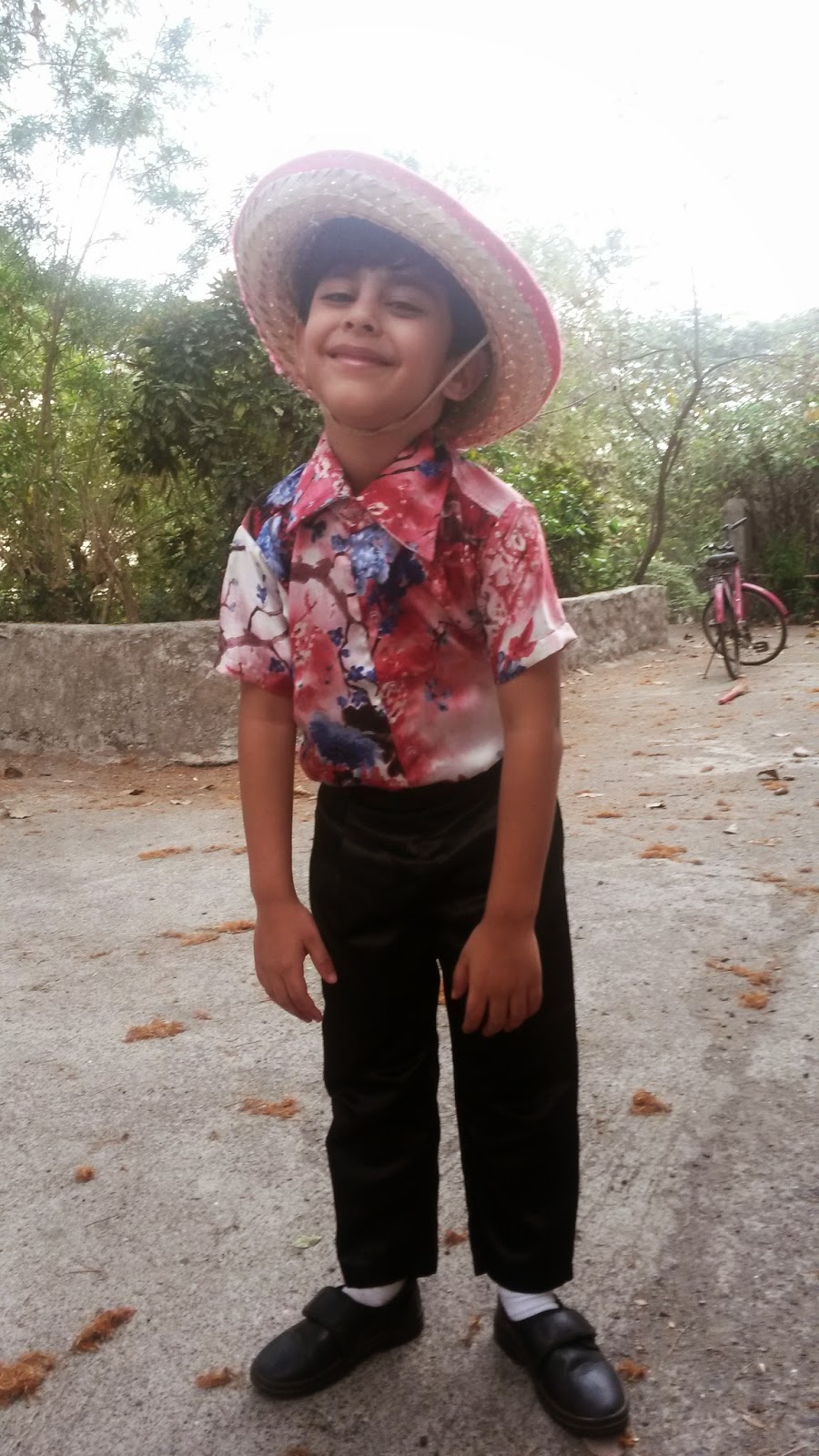 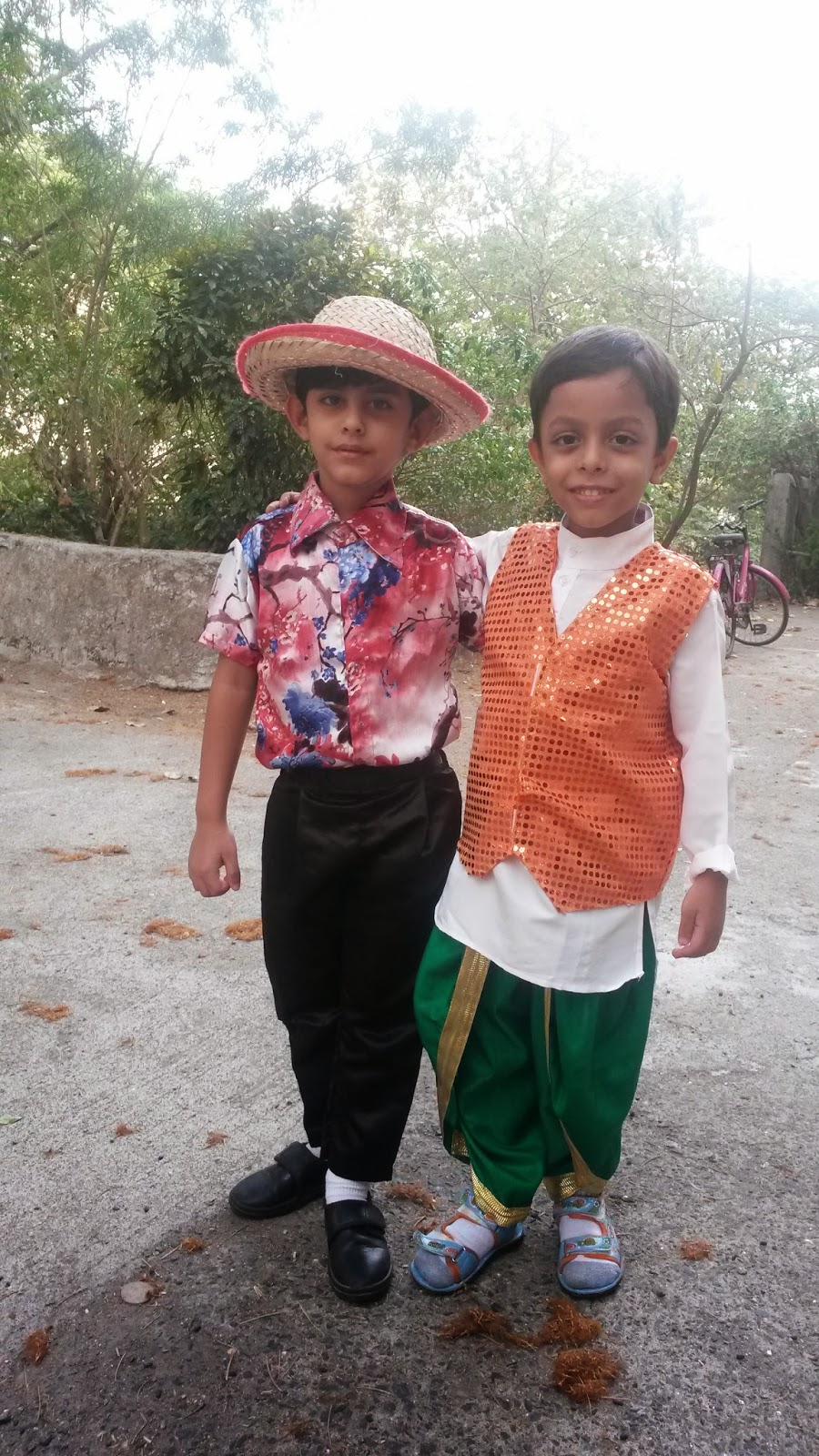 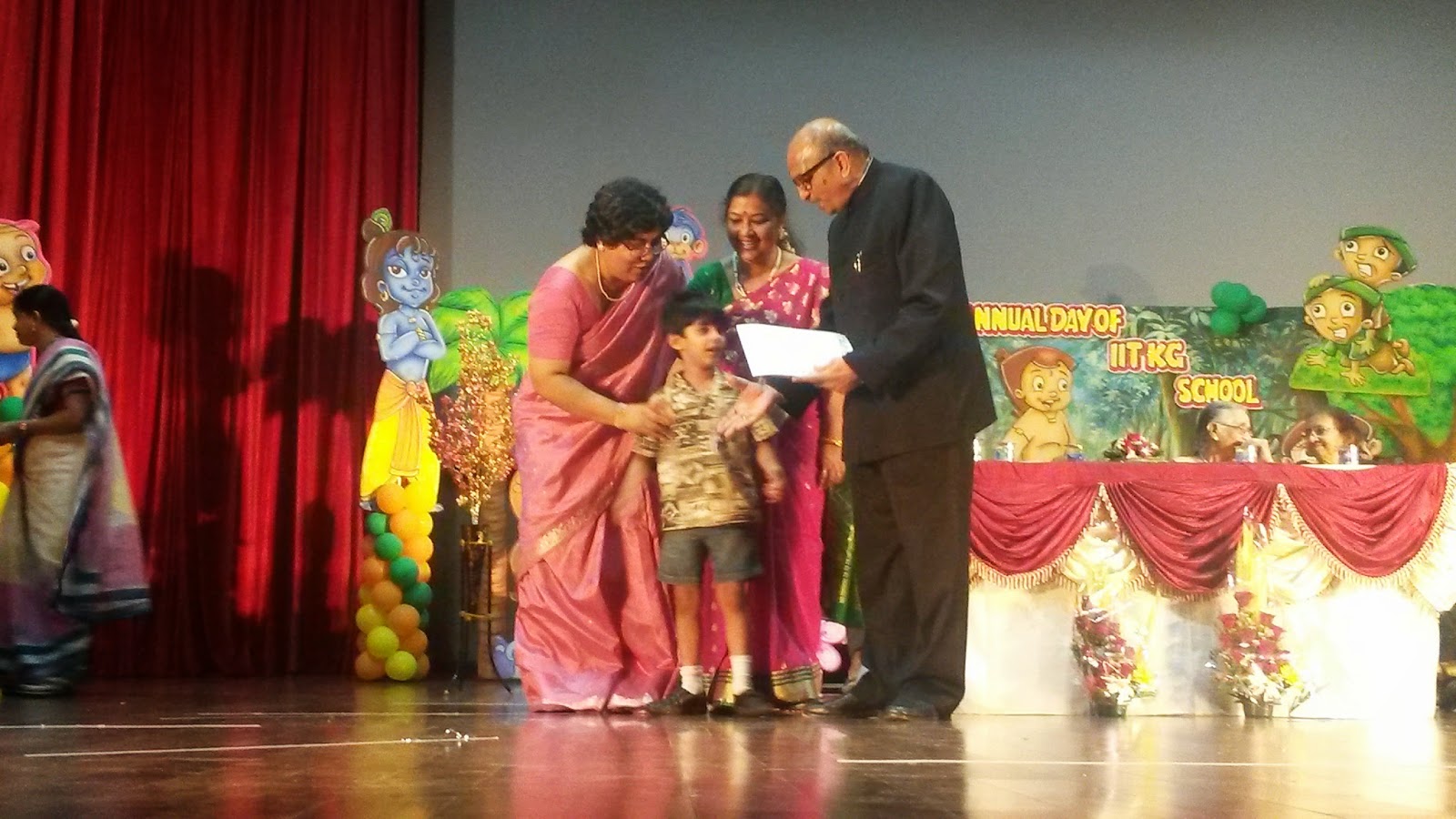