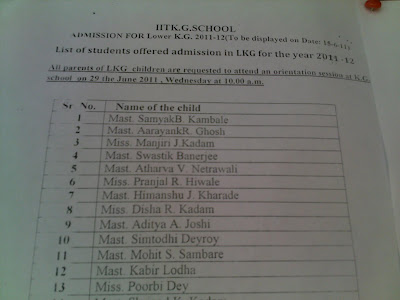 That's right! Kabir has been admitted to Lower KG. His school starts tomorrow. His first day of schooling ever. What a big day!

Except, he's not going to school tomorrow. We're taking him to Goa for a few days to attend a wedding in the family. And after we get back from Goa, we'll soon leave for Udaipur to spend a few weeks with grandparents. This certainly does not bode well for his future. But I don't think Kabir is complaining!

These will have to wait a few days... 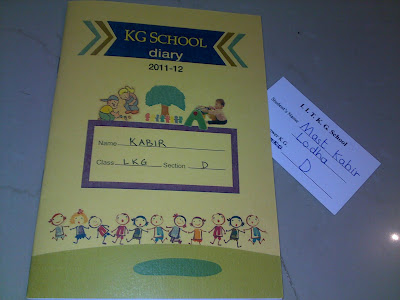 Today, exactly one year from the day I quit my last job in Portland, I submitted the official paperwork for my new job. It is an exciting new development, but it also makes me a little nervous.

Last year, when I quit my job, I felt very comfortable with my decision to spend the coming months with the boys and focusing on getting settled in our new home after the relocation. The initial months after our move seemed like vacation time, but as soon as we had settled in, I started feeling uneasy. Being a stay-at-home mother required boundless energy and patience and most importantly, it offered no luxury of personal space and time. Although I was enjoying being a witness to the boys' special moments and milestones, I was also starting to feel the need to start working outside the home.

However, I struggled to understand this urge of wanting to "work". Afterall, I can say with a fair degree of certainty that none of my official work in the past 8 years has directly had any significant or tangible value to the society. At the end of the day raising two kids to be responsible citizens would count as a bigger accomplishment. By wanting to work was I really looking for an escape route - an escape from tending to the needs of my kids to fulfilling my own needs instead? So was I being selfish in wanting to have a job? And why do men never have to grapple with such issues? This was a regular theme of my thoughts which only led to confusion, guilt and sometimes even anger.

In the meantime, I received two job offers. One was a work-from-home opportunity from my previous employer that required frequent travel and another was a full-time offer by a competing firm. Without much hesitation, I turned them both down. The roles were similar to the role in my last job, yet they no longer motivated me. They did not seem worth the time I was going to have to spend away from Kabir and Anurag.

Fortuitously, I came across a wonderful opportunity, right here on the IIT campus. The role required me to work with rural communities, their elected representatives and municipal and administrative bodies to tackle core problems in the area of water, energy, agriculture, infrastructure etc. I started exploring the job informally at first. Surprisingly, the questions in my head started to fade and no longer confronted me. I tried out the role for about 3 months and realized that I had never felt so passionate about any job in the past! I then formally applied for the job and got officially appointed. I'm doing it part time for now, with the option of turning it full time at a later point.

I hope that this is the middle path that I was looking for - one that allows my identity to grow beyond that of a mother while allowing me to meet the expectations that I have set for myself both as a mother and as a working professional. It is probably still going to be a tightrope walk, but I feel ready for it!
Posted by Pooja at 8:29 AM 8 comments:

Anu has turned into a big helper! He was found diligently sweeping the floor this evening. Now this is a hobby he shares with his brother. Afterall, sweeping floors was Kabir's favorite passtime when he was about the same age. It must be in their genes!
Posted by Pooja at 12:52 PM No comments: 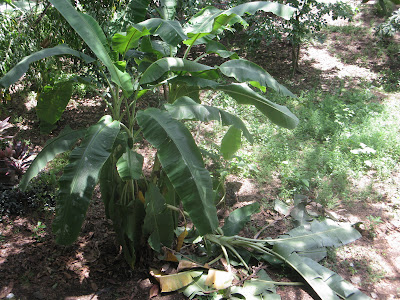 A banana tree fell in our courtyard yesterday. It had a huge bunch of bananas hanging from it, and I suppose the tree could no longer carry its weight. While getting some of the bananas gave much excitement to Kabir, he was sad for the tree and asked many questions about why the tree fell and what would happen to it now.

Today, Saurabh's dadosa (Kabir-Anurag's great-grand father) passed away in a hospital in Pune. The kids had visited dadosa a few times over the past couple of years. Dadosa loved children very much and used to shower his affection on Kabir and Anurag. He had once asked me not to be too strict with the kids and to not raise my voice with them till they are atleast 5 years old! Kabir refers to him as "sabse bade dadosa".
Picture taken in Dec 2009 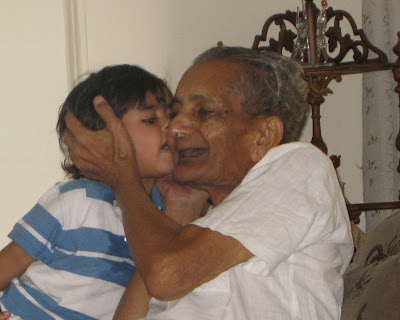 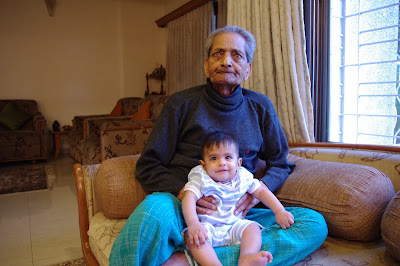 Kabir had many questions when we gave him the news about dadosa. We talked about death, rebirth and the circle of life. He even spotted a little baby banana tree growing next to the one that had fallen.
Posted by Pooja at 10:18 AM 1 comment:

Kabu has now bonded very well with his nana and he frequently insists on going over to nana's house to spend the day and sometimes even to sleep over. In nana's house there are no rules - he can eat what he likes, watch as much airplane videos on youtube as he desires and go to bed as late as he wishes. Apparently, he also has long conversations with nana. Kabu usually has lots of questions about planets, phases of the moon, airplanes and almost everything under the sun, to which Nana usually responds with long and scientific answers.

Here is one such conversation he recently had with nana at bedtime, when nana was trying to make him sleep (retold by nana):

Kabir: Nana, what is a motorcycle? I know what's a cycle.
nana: Motor cycle does not have pedals. It has a motor which makes it run.
K (lying in bed looking at the ceiling fan): Does that fan also have a motor?
N: Yes it also has a motor which runs on electricity.
K: Is it the same electricity which sometimes goes away and then the fridge, microwave and washing machine stop working?
Posted by Pooja at 10:14 AM No comments:

Four days after his first few steps (and a week before his 15 month birthday), I think we can officially declare that Anurag can now walk! It is a different matter that it requires much persuasion and motivation to make him do so. I even managed to get it on video today.
Posted by Pooja at 11:40 AM 1 comment: